One of the main achievements in the world of data routing over the last two decades is the emergence of the distributed routing architecture.

Traditionally, enterprise VoIP networks are controlled by the IP-PBX and call routing is typically based on static routing tables. The situation becomes complicated for off-net calls. The IP-PBX deals with such calls by directing them to the nearest media gateway or session border controller (SBC).

In the case of multi-branch organizations, a single VoIP network may have several IP-PBXs from different vendors, as well as media gateways and SBCs. Each IP-PBX, SBC and gateway in the network has its own static routing table resulting in a distributed system in which the included elements do not communicate with each other.

In theory, one could configure all the network elements once and leave everything unchanged. In reality, however, organizations’ VoIP networks are constantly evolving due to a variety of factors: mergers & acquisitions, new locations, integration of new & old IP-PBXs (or even legacy PBXs) and integration of SBCs and gateways. In addition, there is the organic growth of an organization and the accompanying technology evolution, such as introducing unified communications to the network and consolidating IP-PBXs. All of this makes managing the organization’s VoIP network a nightmare. A static approach is no longer fit for the job - there is a need for a centralized routing management system.

System administrators should be able to design and modify their voice network topologies and call routing policies from a single location, resulting in significant time and cost savings. Time-consuming tasks such adding a new PSTN or SIP trunk interconnection, adding a new branch office or modifying individual users’ calling privileges should be carried out simply and rapidly. 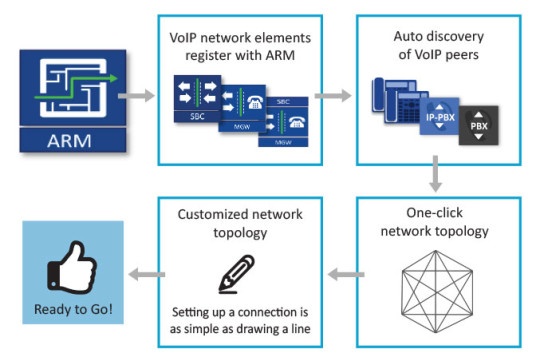 The AudioCodes Routing Manager is a critical solution. It reduces the operational time spent on designing and provisioning the network topology; it dramatically reduces OPEX by avoiding routing configurations of many VoIP network elements; it lowers the need to rely on telephony experts; and it reduces the time spent on adopting evolutions in the network.

Learn more about the ARM: https://www.audiocodes.com/solutions-products/products/management-products-solutions/audiocodes-routing-manager

The ARM was recently featured in an article on No Jitter: http://www.nojitter.com/post/240171460/audiocodes-tackles-simpler-session-management