While out on the road to present the AudioCodes strategy around the Microsoft Teams journey in the weeks after Microsoft Ignite 2017, it became clear to me that we’d had the right vision back in 2014 when we introduced CloudBond 365. The resource forest model as a foundation for each member of the CloudBond 365 family demonstrates more than ever that our CloudBond 365 solutions enable our customers and partners to be future-proof.


After the announcements at Microsoft Ignite 2017, we at AudioCodes are highlighting the ability of CloudBond 365 to serve as an OPCH. For those of you who aren’t familiar with this Microsoft acronym, OPCH stands for On-Premises Configuration Hybrid. As such, our CloudBond 365 OPCH is a PSTN connectivity appliance for Skype for Business Online, and serves as an alternative to Cloud Connector Edition (CCE) where coexistence with Skype for Business Server is required. Paul Cannon’s Microsoft blog refers directly to such third-party OPCH specific appliances for those who don’t want to modify their main deployment.

Over the past few weeks, our partners have been asking me when CloudBond 365 OPCH will become available, strongly indicating that they are continuing to enable Skype for Business Online users with Cloud PBX (now renamed Phone System) in a future-proof way.

The OPCH deployment model has been supported ever since the introduction of CloudBond 365, which means that we have this solution available right now. In the past, we referred to the solution as Skype for Business Hybrid Voice. Today, we refer to it by the OPCH acronym. As a matter of fact, most of our CloudBond 365 appliances installed over the past few years are deployed in this Hybrid Voice model, enabling voice services for Skype for Business Online. The exact same CloudBond 365 solution will also bring voice capability to Microsoft Teams in the future, through Direct Connect. 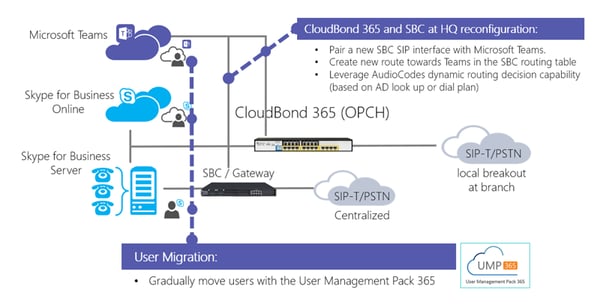 CloudBond 365 and SBC at HQ reconfiguration

Something that will be new to our CloudBond 365 family ties in very well with Microsoft’s announcement that Modern Authentication for Skype for Business Server has gone to Public Preview. This allows CloudBond 365 to authenticate Skype for Business users against the Azure Active Directory, eliminating the need to set up bidirectional trusts between CloudBond 365 and the on-premises user forest(s). For topologies that are now supported in Public Preview, please read this.

It is also important to note that our entire CloudBond 365 family of solutions have User Management Pack 365 built-in. This is a powerful but simple web portal that ensures a smooth deployment and provides a single pane of glass across all Skype for Business deployment models.

If we go back to Paul Cannon’s blog, we can see Microsoft’s recommendation for enabling on-premises Skype for Business for Hybrid PSTN. This is an excellent moment to point out that User Management Pack 365 sits intuitively on top of existing on-premises Skype for Business deployments, connecting the enterprise environment with Microsoft Office 365 (‘split domain’) via special connectors. After the initial setup, UMP 365 empowers IT departments by facilitating a gradual and fully controlled migration to Microsoft’s Phone System today, and to Microsoft Teams in the future, from any existing Skype for Business deployment.

Our goal is to help our partners and customers stay on track with their journey to intelligent communications across Skype for Business Server and Microsoft Teams. For me personally, it has been very refreshing and rewarding to hear from our community over the past few weeks that we have exactly the right solution – at exactly the right time – to do just that.

To talk with an AudioCodes expert, click this button.

After the announcements at Microsoft Ignite 2017, we at AudioCodes are highlighting the ability of CloudBond 365 to serve as an OPCH. Our goal is to help our partners and customers stay on track with their journey to intelligent communications across Skype for Business Server and Microsoft Teams.